STATE OF THE TOWNSHIP ADDRESS

Happy New Year! Congratulations Frank on day one of your first term on the Township Committee. Just for the record, you have 1,094 days to go. 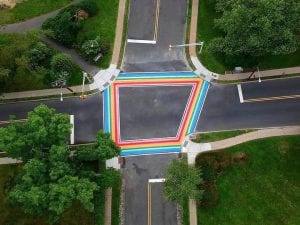 India, Nancy, Greg and I look forward to serving with you and benefitting from your enthusiasm and energy. Being a member of the Township Committee is a terrific experience and you will be part of the process to making our community the best it can be.

Thank you Marlon Brownlee for serving with distinction for five and a half years. And to Ian Grodman, we appreciate all you do for this community and for stepping up four months ago to serve on this body and share your experiences and wisdom with us.

I want to thank my colleagues for electing me as Mayor for 2017. I believe we are strongest when we operate as a collegial and cooperative body. We work well together to keep Maplewood interest first and foremost.

January is an important month for democracy. Across our nation in ceremonies like here today, those recently elected will take their oaths of office. From Township Committee to President, all will pledge to preserve, defend and protect the Constitution of the United States.

We on the Maplewood Township Committee take our commitment to the Constitution very seriously. Our community will continue to be welcoming and open, embracing individuals of diverse racial, ethnic, religious and national backgrounds, and different ages and sexual orientation. And we will not condition the provision of Township services or benefits on matters related to citizenship or immigration status and we will not take any action to profile or register individuals or groups based on religion, race, ethnicity, national origin or immigration status.

Today, I am happy to report the State of the Township is excellent and our future is bright. At age 95, Maplewood continues to be a safe and attractive community to which people are choosing to move, invest in and open up businesses. Maplewood’s brand and reputation are solid.

New Jersey Realtors ranked Maplewood among the 10 hottest real estate markets in the state, citing our proximity to New York and emphasis on diversity and community. It reported that homes are on the market for an average of 38 days, the median sales price is $575,000 and selling prices are consistently above listings.

The Star Ledger listed Maplewood among the top 12 most LGBT friendly towns in New Jersey. LGBT activists identified Maplewood as welcoming and progressive on issues affecting the gay community.

And if you want to live someplace green, Maplewood is it. In November, the Township earned Silver Certification from Sustainable Jersey, one of only 44 municipalities in the state to get such an honor. Maplewood also received the 2016 Sustainable Jersey Collaboration Award for its work with Millburn and South Orange and it was one of five towns selected to participate in the N.J. Solar Challenge, a program designed to make solar energy systems simple and easy for homeowners.

Last September we had one of the most exciting times in Maplewood when we celebrated our hometown, Olympic Champion Fencer Ibtihaj Muhammad. The motorcade along Springfield Avenue, ceremonies at our two library buildings and parade into Maplewood Village were terrific. More than 1,000 people came out to thank Ibtihaj for representing our nation and our community.

We had another bit of excitement just a couple of weeks ago with the opening of Essex County’s first Wawa on Springfield Avenue. When we created the vision for a revitalized Springfield Avenue, we knew it was critical to fundamentally change its eastern border. Well we succeeded in attracting tens of millions of redevelopment dollars in that area and now have a new Wawa, the re-opened Maplewood Diner and the Avalon Bay apartment building. Next up is the opening of Cornbread Restaurant in May and the redevelopment of the former Jewelry Mart building. These moves are game changers for the future of Springfield Avenue.

Our public parks and facilities are important to our community. A year ago the Township Committee took decisive action to expand our recreation facilities by purchasing the former church building adjacent to DeHart Park. Our Recreation Department is excited about the opportunities this new facility will provide and started holding events there last November. You will see much more use of this building as the year goes forward.

We also added air conditioning to community room at the Burgdorff Center for the Performing Arts and renovated the kitchen at the Woodland. The Community Center in DeHart Park is due for $140,000 of improvements paid for by Elite Properties, the developer of Maplewood Crossing, as part of the community benefits agreement it negotiated with the Township.

Maplewood Memorial Park is a gem. Last October, it was selected as one of New Jersey’s Great Public Spaces by the NJ Chapter of the American Planning Association. In announcing the Award, the Association said “Memorial Park effortlessly blends the use and characteristics of a local park – where children meet and play – with high quality attractions that draw visitors from across the tri-state region.” I’m happy to report the Township Committee gave a green light to the creation of the Maplewood Memorial Park Conservancy to focus on fund raising and advocacy. You’ll hear more about the Conservancy over the next few months.

There was a lot of activity on other fronts too. We:

Public safety continues to be a top priority. The Maplewood Police Department does an outstanding job. Major crimes in 2016 were down by 13 percent from the year before. Of the 25 robberies and aggravated assaults last year, 16 or 64 percent were cleared by detectives, an exceptional rate. Thank you Police Department for keeping us safe.

Last October, I saw our Fire Department in action at the fire on Ostwood Terrace. Although the two family home was destroyed, thankfully no one was injured. We thank the firefighters for all their work, including the nearly 1,500 emergency medical service responses they made last year.

All of our departments were busy in 2016 

Members of the Township Committee also spoke out on broader issues that impact our community. We called for a redistribution of state school aid, stronger federal consumer protection rules to address predatory lending, an end to human trafficking, and passage of the Presidential Accountability Act. We spoke loudly about the proliferation of guns in our society and the need for common sense reforms. Last June, we joined with thousands in wearing orange on National Gun Violence Awareness Day and rallied with dozens in Memorial Park. Later that month, we sadly came together in South Orange in a vigil for the victims of the horrific Orlando massacre. Our voices will continue to be heard on important issues like these.

Last year Maplewood and South Orange launched SOMA: Two Towns for All Ages. Through this initiative both towns will provide programs and services and adopt policies and practices to advance an age inclusive community that embraces intergenerational activities and support systems for all. Nearly 40 volunteers and municipal employees from the two towns developed exciting work plans for 2017. I want to thank the Grotta Fund for their financial support and technical assistance.

We also established the Maplewood Seniors Advisory Committee to guide the Township Committee on ways to improve the quality of life for older residents and engage them more in the civic life of the community. Thank you Ian Grodman for your leadership in establishing this important committee.

As I promised last year, in 2016 we held a Traffic and Pedestrian Safety Summit to address this growing problem. In June we brought together experts in the field to discuss what Maplewood is now doing and what we can do better. In October, over 80 residents attended the Summit to discuss ways to slow traffic and increase the safety of pedestrians. Let me tell you what we have accomplished.

Working with the Engineering Department, we:

The Police Department instituted a pedestrian safety education and enforcement program directed at commuters and students who walk to their destinations. The police have been doing more radar enforcement and initiated crosswalk details around town.

For our efforts, the Township was recognized by the North Jersey Transportation Planning Authority for its “vital contribution to making pedestrian safety a priority in the community…and in doing so contributing to the goal of making New Jersey safer for pedestrians.”

Our work is not over and pedestrian safety and traffic calming will continue to be priorities for the Township Committee. We are negotiating with Essex County to install a traffic light at Valley Street and Pierson Road and to stripe a new crosswalk in the Irvington Avenue shopping district. We will redesign the Baker Street and Maplewood Avenue intersection to make it safer for pedestrians and drivers. And we will complete work around Clinton School as part of our Safe Streets to School Initiative. Lastly, we intend to apply for technical support through the State’s Pedestrian Planning Assistance Program.

We have a team of professionals who are committed to serving the people of Maplewood. Joseph Manning provides excellent leadership as our Township Administrator. Elizabeth Fritzen, Township Clerk, and Roger Desiderio, Township Attorney, are key members of the executive team. Let’s thank them for their dedication to Maplewood. Let’s also recognize and thank our department directors and employees who do an outstanding job in serving Maplewood. Please stand so we can thank you. Great things are going to happen in 2017 and we want you to be involved in making Maplewood better each and every day. If you want to volunteer, we’ll find a role for you.

There are boards and committees on which you can serve and advise the Township Committee. There are civic groups looking for new ideas and energy. For those of you already engaged we appreciate and thank you for your time and talent. If you’re not yet engaged, contact us and we’ll put you to work.

Thanks Maplewood for giving us the opportunity to serve you. I am very excited about our future and I hope you are too.